Port of Torshavn in the Faroes from Ventura

So far on our cruise we have been enormously lucky with the weather. The outside air temperature sometimes feels chilly, but the sea is still calm, and the ship is surrounded by sunshine. It’s hard to believe that we are so close to the Artic Circle. Our approach into Torshavn in the Faroe Islands yesterday was overcast, but the skies soon cleared.

The Faroe Islands are situated halfway between Norway and Iceland, and, although under the sovereignty of Denmark, they have their own language and culture. The local currency is the Faroese Krona, but Danish Krona are also widely used. As we sailed into the harbour in the early morning, the surrounding countryside was haunting, though not as bleak as I had expected.

Brightly coloured houses were dotted around on the hillsides and the town of Torshavn itself combined tourism with industry.

There were numerous ship's tours to choose from, but Chris and I chose the less energetic option of wandering around the charming little town. Complimentary shuttle buses were provided to transport passengers through the towers of containers to the port gates, but most people chose to ignore the buses and take the five minute walk along the port side to the information kiosk and the pretty harbour and then into the town centre.

There was a great view of Ventura, as we approached the harbour.

The town was hilly, but there were plenty of seats along the way, some quite entertaining for the less able to rest en route. 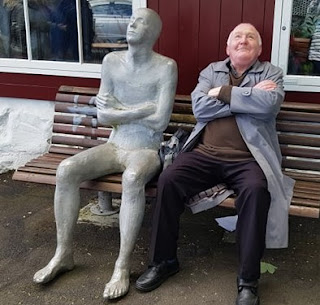 Cruise passengers filled the little town, but we were made to feel very welcome. Cars stopped to allow us to cross the mostly narrow roads, and shopkeepers were more than happy to allow us to browse with interference offering help only when needed. I suspect that the arrival of a cruise ship provided a welcome boost to their island community. Goods were expensive, but many tourists purchased coffees and small souvenirs. Chris purchased a Faroese hat, and I used the change to purchase one tiny Christmas tree decoration.

We loved the eco-friendly grass roofs, but couldn’t help but wonder how they could be mowed in safety.

We also enjoyed the statues and monuments dedicated to local writers and heroes.

When we sailed out of Torshavn at about 5pm the sun was blazing on the open decks, and many people chose to watch or join the entertainment team as they danced us away from the Faroe Islands.

Sailaway parties do not particularly appeal to me, but I have to admire the hard work and ceaseless energy of the entertainment team.

Today is another sea day, but at 3.30 this afternoon the first Icelandic snow capped peaks appeared on the horizon, and a whale allowed us a glimpse of his circling body as he danced close to the ship. More to follow......
Posted by Claire Baldry at 08:00