This weekend will be special, because it takes us on a family cruise from Southampton to Norway. 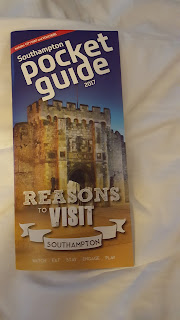 What can I  say about Southampton?  It is a familiar location for very many cruisers. With four large purpose built terminals, it is the busiest cruise ship port in the UK. The journey from my home town of Bexhill only takes between two and three hours, and we often choose the city as our embarkation point for cruises. Yet despite frequent visits, we are still learning about the city.
We don’t drive to Southampton anymore. We occasionally book a taxi, but mostly take the train. On a good day the railway journey takes less than three hours. However, because there can be bad days, due to engineering works, signalling problems or industrial action, we tend to travel a day early.
For this trip, we have chosen to arrive two days early. We wanted to avoid the weekend engineering work by network rail, and to take the opportunity to meet up with an old friend who lives nearby.
We set off on a Friday, and the familiar train journey is particularly smooth.....on time, not overcrowded or noisy, blue sky weather. With our Tesco point funded rail tickets we travel for free, and enjoy a picnic en route. The Southern Railway train travels to Eastbourne adjacent to the coast, then onwards  through the chalk hills of East Sussex to Lewes and Brighton. We change trains at Brighton and climb into the carriage which will transport us directly to Southampton. We travel through the familiar stations of Hove and Worthing and Barnham, enjoying the views of the Shoreham estuary and the river at Ford. After this the scenery slumps into monotony until finally relieved by glimpses of water and the promise of the sea. 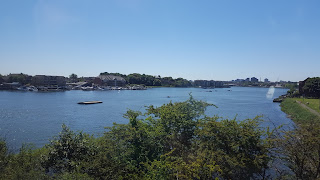 The station before Southampton is Swanwick, a full twenty minutes away from our final destination.
Buses in Southampton are frequent and efficient, but we spend £5 on a taxi to the hotel. It’s half term, so I booked the West Quay Premier Inn some considerable time ago. This is just as well, as the hotel has been fully booked for several months.
Premier Inn is a well known product, reliable with comfortable beds, but otherwise unremarkable. The one in West Quay is large.

There is a well rehearsed and efficient system for checking in, and a list of the visiting cruise ships on display outside the lifts. 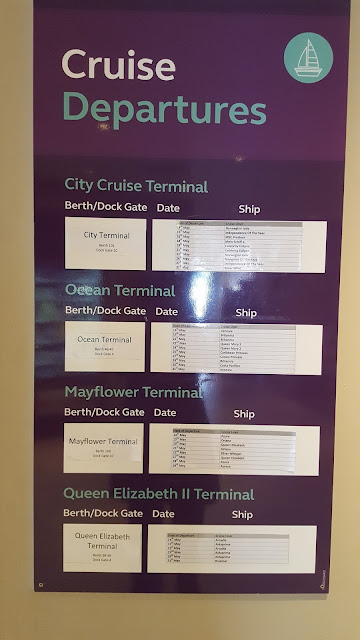 For travellers embarking at City Terminal, it is just a few minutes walk. Independence of the Seas dominates the landscape, as if the Captain has parked on the pavement. 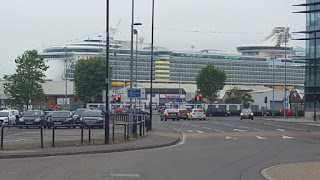 The location is new to us and set amongst the newly built West Quay shopping area.
Chris and I have an established routine on arrival. He takes possession of the TV remote control, while I unpack a few essentials. Then I make us both a cup of tea, and wonder if I can be bothered to request extra milks. Chris then falls asleep, and I grab a key card and a shopping bag, and leave him to rest. In the past my routine would also have included waking him to insist he checks his blood sugar, before I leave. With the new pump this is no longer necessary, but I do leave a tube of sweets by the bed for him in case the pump alarms.
It is mid-afternoon, and the humidity is building. There is a Darth Vaderesque knewly built cinema and leisure complex opposite the hotel and  a small supermarket next door. 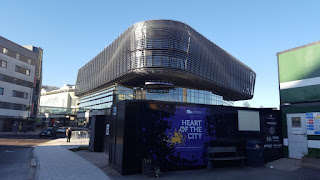 I notice an enclosed upper walkway leading to John Lewis and Marks and Spencers, but I have no idea how you access it. As Chris delights in telling me often, he has serious doubts about my spatial awareness. I prove the point by wandering for far too long amongst the shed loads of car parks and carpet and furniture warehouses, before crossing the road and finding a lift to the upper shopping floor. 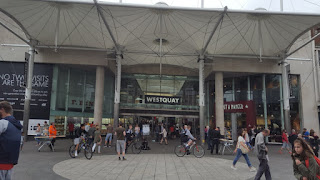 I eventually realise that the area is split level and finally emerge in the old town of Southampton. It is, I then discover, only a few minutes walk from the hotel. I return with milk, wine, a free tourist map, and a proposal for dinner.