Azura is one of the larger ships in the P and O fleet. Sister ship to Ventura, she weighs 115,055 tons and has capacity for 3,100 guests and 1,250 crew. We chose her as our travelling home to Norway for the May half-term. Having sailed on Azura before, we looked forward to her light and airy décor and well organised service. We knew that the children’s clubs, eateries and varied entertainment were likely to suit our family party of three generations, one of whom had never cruised before. 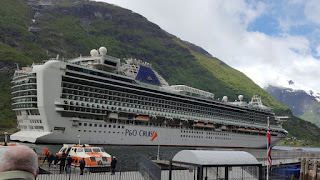 Embarkation was reasonably straightforward. Our latest check-out from the hotel was midday, so we ate some lunch in Southampton, then paid for the £5 taxi ride to Mayflower terminal. Although our ‘official’ check-in was 3.00 pm, we were called to the desk at about 2.20 pm. By this time we had realised that P and O had given us a last minute cabin upgrade from aft to midships. Consequently, the luggage labels on the two cases which had been checked in earlier by my daughter did not match our printed boarding passes. (Note to self….double check your luggage labels before departing!) Our other worry was Chris’s new sensor insulin pump and tester, which must NOT go through X ray. In the event, neither concern caused us too many problems. The security team were well aware of the problems with insulin pumps and made no fuss about screening Chris without X ray. In fact they began to recognise him at each port of call and have a chat as they screened him. Our cases did find their way outside the wrong cabin, but I managed to retrieve them, before they were sent to the ‘lost cases’ room.
Best of all, despite earlier rain, the sun began to shine in time for our sailaway from Southampton. We had  an amazing view of P and O's largest ship Brittania, as we set sail. 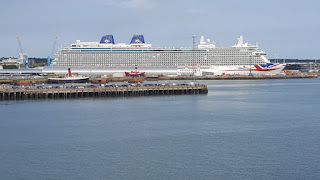 Calm seas ensured  a very smooth crossing from the English Channel to the North Sea, and indeed for the entire cruise. The ship was however woken by the drama of two hours of thunder and repeated lightning which sent strobes of  bright flashes into our cabin in the early hours of Monday morning. I will give more details about food and venues on Azura in a later blog post, but, for anyone thinking of booking, this was our chosen accommodation. 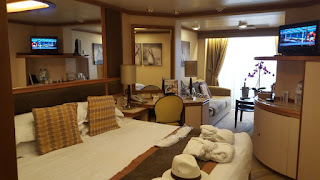 It was a superior deluxe balcony cabin on D deck. Chris tends to rest each afternoon, and it helps to have a bit more space. There was plenty of room with two TVs, ample storage, a sofa, and a full-sized bath with shower over. The spacious balcony easily housed two reclining chairs and a small table. If privacy is important to you, be aware that the balconies are overlooked. These cabins are not at the economy end of cruising, but they are far less expensive than a full suite. If your cabin is an important feature of your cruise, then I would recommend considering a superior deluxe. If you prefer to save your money for other holiday spending, then all the cabins on Azura are well designed and comfortably appointed.
Azura is a large ship. You can easily lose yourself in the long corridors. 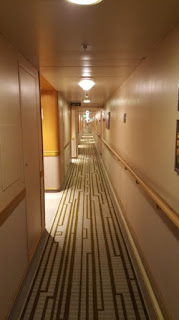 However, the ship remains one of my favourites, and I will try and describe more about her as this section of my blog unfolds. 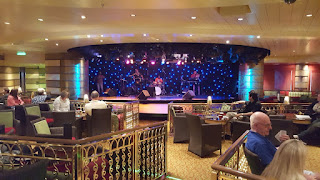 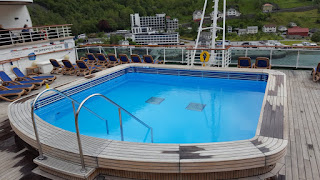 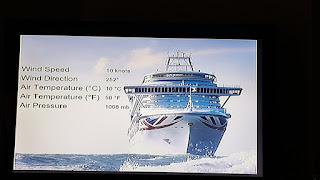