From Dartford to Docklands

Last week Mr Bits and I embarked on one of our last planned stayaways of the year. It was a trip which had fallen into place for several unrelated reasons. This is how it happened.
Shortly before Christmas 2016, Mr Bits and I strolled along to the Bexhill Rowing and Social Club for their monthly raffle. Because it was December, the prizes were particularly enticing. We were very excited when Mr Bits won the first prize, which was £150 worth of London theatre tickets.
So when a Ladies Probus group rang me a few weeks later to ask if I would take my poetry to Dartford, I agreed, planning to combine the poetry booking with a couple of nights in London, and a  free trip to the theatre. We booked matinee tickets for Phantom of the Opera, and a two night stay in a hotel near Canary Wharf. What we hadn't planned for was the Bexhill virus which attacked us both the week before our trip, and left us struggling for energy. But we made it to Dartford!
The train to Victoria was delayed, so we had to get a later connection to Dartford. (More delay, repay) Nevertheless we arrived at the venue on time. Worryingly one of the audience was taken ill at the start of my performance, but I understand that she did recover. It is the first time that I have performed my poetry in the presence of three paramedics.....the show must go on!
Once finished, we gathered up our cases, and my guitar, and headed back to Dartford: thence by train to Lewisham, and onwards to Heron Quays on the Docklands Light Railway. It was my first visit to the Docklands area, having previously only recognised its iconic skyline from the train.
And it is impressive. This was the view from our ninth floor hotel bedroom. 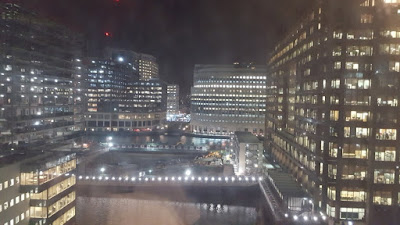 What we hadn't realised was how much building work would be going on in the area. Several footpaths and roads were closed, and it took us a long time to find our hotel. Actually docklands seemed full of people pulling suitcases searching for their hotels, which in a perverse way made me feel better. Nevertheless I liked Docklands. Would I stay there again?...certainly yes. Would I stay in the same hotel?.....probably not.
We stayed at the Britannia International, which is apparently at the budget end of London Hotels. This is because they do offer rooms without windows. The price we paid for our window room was far higher than the budget prices quoted on booking sites.
The hotel looks good from the outside, though it is surrounded by building work. 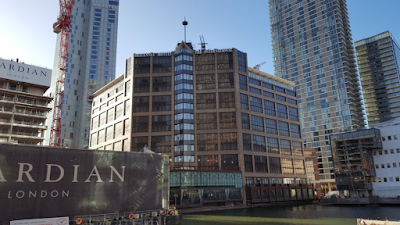 The shared lounges, bars and lobbies are comfortable, if a little dated, and the buffet breakfast was good. 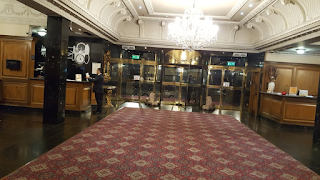 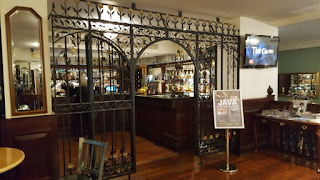 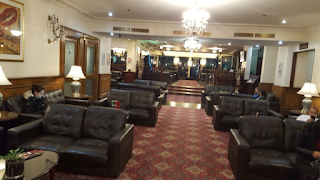 I even enjoyed looking at some of the more quirky decorations. 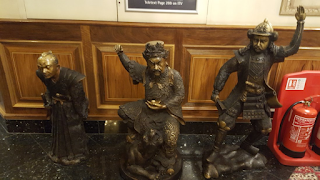 Our room was clean, reasonably spacious, and comfortable with a good sized bathroom and lots of storage, though sadly no fridge. 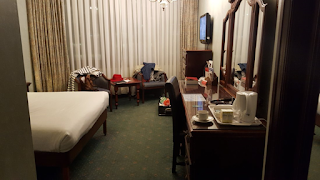 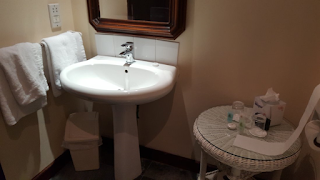 So what were the downsides?
Firstly, even though it was November, the room was unbearably hot. When I mentioned this, the staff admitted that the air conditioning wasn't working, and arranged for the delivery of an electric fan. Since the fan merely moved the hot air around the room, as the windows didn't open, the temperature remained hot throughout our stay.
Secondly, because we were tired, and there were very few eateries within easy walking distance, we used the hotel pizzeria on the first night. Years of eating school dinners have made me pretty tolerant to indifferent food quality, but I can honestly say they served up the worst reheated frozen pizza, I have ever encountered. The plastic-like cheese and thin soft dough, did not live up to my vision of a pizzeria serving freshly made crispy pizza with generous high quality topping. Note the extra mushrooms I ordered for £1-50. 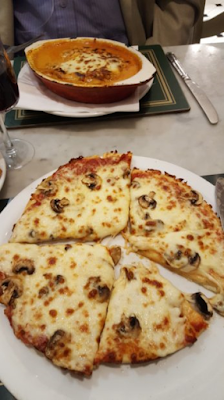 The next evening we brought ourselves a sandwich from the nearby Tesco Express.

So sorry Britannia International, but you will not get our business again. I rarely criticize hotels on my blog, but a large commercial chain like Britannia Hotels could so easily do better.
Anyway the trip was as a whole, had lots of positives....more of that in my next post.
Posted by Claire Baldry at 12:32