Leicester Part Two, A King and A Car Park

On 4th February 2013 it was officially announced that the remains of King Richard III had been discovered under a Social Services Car Park in Leicester. He had rested in his anonymous grave for 527 years until the passion of the archaeological team pursued the project and uncovered his body. DNA evidence and the marked curvature of the skeleton's spine proved his identity beyond doubt. 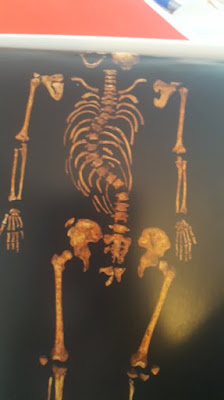 So Chris and I allowed ourselves an extra day in Leicester to visit the new Richard III Centre. During the walk there we discovered Leicester Old Town, largely pedestrianised and worthy of several days' more investigation. 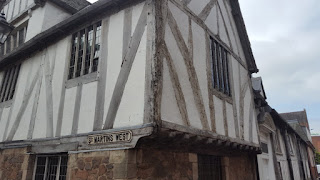 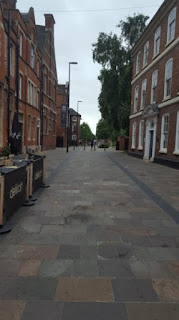 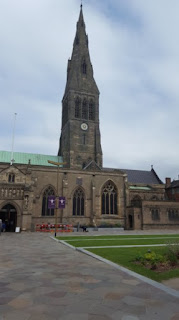 But the highlight of our day was undoubtedly the centre itself. 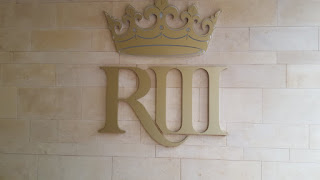 At £8 per head for seniors, and not much more for younger people, it was incredibly good value for money. I learned a lot about British history, and was stunned by the way history, theatre and and art appear to have misrepresented the former King. It seems likely that he wasn't such a bad chap after all. Maybe we should send some of our less scrupulous journalists on an outing to Leicester. What they do now is apparently not original. Misrepresenting the truth, it would appear, is 'old hat'.
The centre itself is designed to be visually captivating. Every exhibit is enhanced with screens, and films and interactive displays. 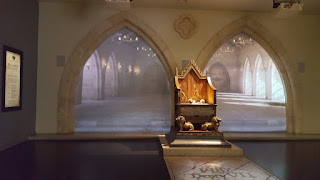 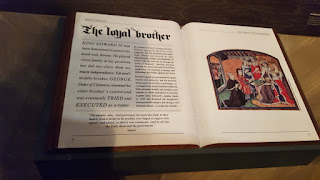 The grave itself is covered by a glass walkway with an intermittent hologram of King Richard's remains. Many of the passionate volunteer guides were involved in the dig and happy to share their first hand experiences. We were captivated.
No wonder Leicester was the chosen home of Thomas Cook. It is indeed a place worthy of travel. 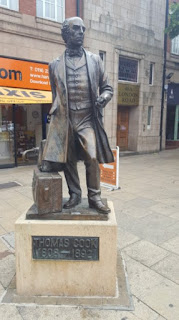