A Birthday in Olden

The village of Olden nestles in a valley between the towering peaks which dominate the innermost arm of the 65 mile long Nordfjord on the west coast of Norway. This was the location for our second stop in Norway. We headed west to enter the fiord in the early hours of the morning. Being so much further north, sunrise was at 4 am. 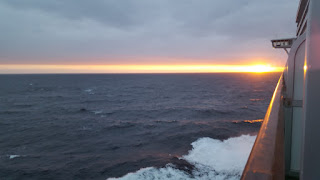 It was also my sixty-second birthday. I could think of no better way to celebrate, than to be surrounded by such beautiful scenery in the company of much loved family. 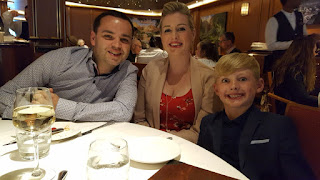 As we approached the village, we could clearly see the recently fallen snow on the tops of the mountains. 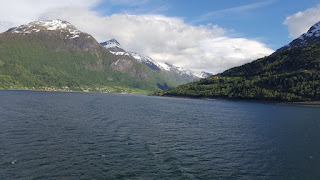 By the time we docked in Olden, the Norwegian weather was typically fluctuating between sunshine and showers. The younger members of our family fastened their sensible footwear, and joined a trip to walk across the glacier. Chris and I paid £20 each and took the hour’s ride on the little ‘Noddy’ bus which toured the area. It stopped right beside the ship, and (in Norway terms) was good value for money. 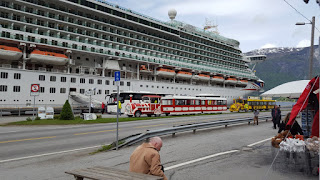 The bus made two ‘photo stops’ en route and allowed us to view the bubbling river which flowed from the mountain tops into the fiord. 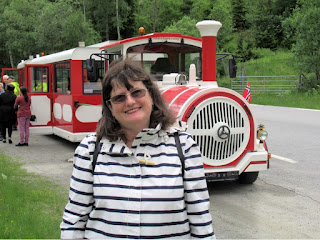 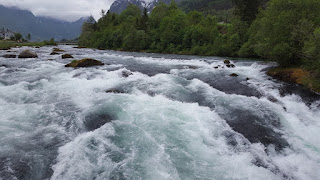 For those who wished, the bus also dropped passengers by the compact shopping area, which consisted of a small supermarket, a few souvenir shops, and a café. This stop was about a ten-minute stroll from the ship. And so we arrived back on board in plenty of time for a leisurely lunch, and a rest before dinner. Our cabin allocation had included a bottle of champagne, which we opened on our balcony to celebrate yet another birthday. Cheers everyone! 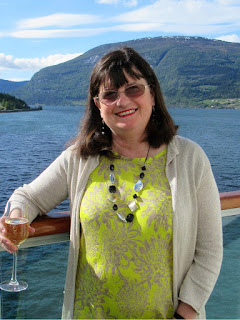