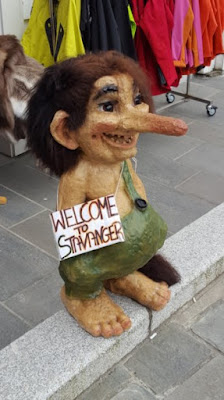 Stavanger is a small city on the southern coast of Norway. It is a frequent first port of call for cruises to Norway. Rich in oil and set among a network of islands which are linked by architecturally interesting bridges, it is often known as the ‘Petroleum Capital’ of Norway. 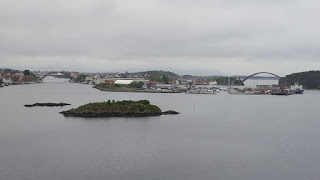 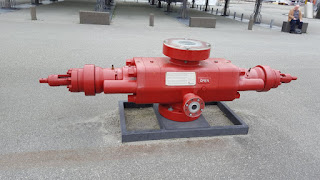 The city had definitely grown in size since Chris and I stopped off there about 10 years ago, but it has retained its 'old world' Norwegian charm. A hillside of wooden clad houses greets the travellers, as they sail into the port. You can easily pass a few hours wandering through the twittens and cobbled streets. There are also at least 5 museums within walking distance of the centre of the city. 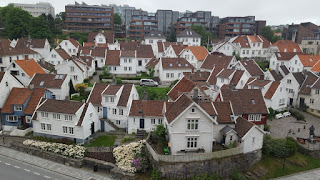 And however far you walk into the city centre, the visiting cruise ships dominate the horizon. You are unlikely to get lost! 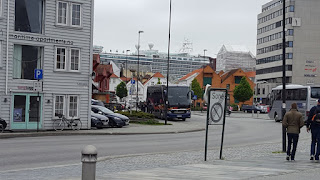 Browsing the shops full of patterned knitwear, fur hats, and troll themed souvenirs is interesting, but expensive if you buy. 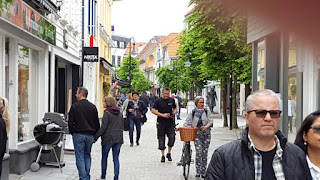 We chose to take a tour on the modern, single storey hop on hop off bus, which stops close to the ship. At £25 each for an hour's round trip, it isn't cheap, but it gives a good feel of the area, and a flavour of Norwegian humour. You can get on and off as often as you want, and the ticket is for 24 hours. The buses only run on days when a cruise ship is in port. They are certainly less expensive than a P and O trip, frequent, comfortable, and offer protection from the changing Norwegian weather. 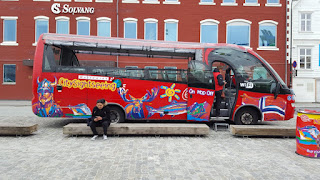 To sum up, Stavanger a pretty place to visit, full of interest and quirky history. The city is enormously clean and polite, and visitors feel safe. There are fountains and green parks and free playgrounds and activities for children in the many public spaces.