The long sail into the small town of Gerainger was impressive. Cascading waterfalls welcomed us, and the weather looked promising. 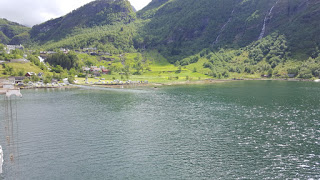 The ship dropped it's anchor in the centre of the fiord, and the sun reflected on the water as the tenders prepared to transport us ashore. 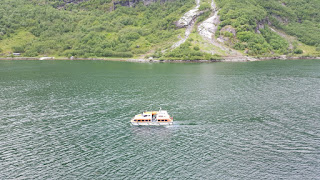 Gerainger lies at the start of a Unesco World Heritage site so we had decided to take the half day P & O trip up to Mount Dalsnibba. 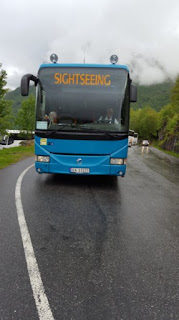 We caught glimpses of Azura as we ascended away from the town and were hoping for wonderful views of the blue lake as our coach climbed towards the summit. 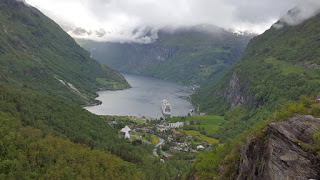 Half way up the mountainside our escort explained that they had had three weeks of unexpected snow, and more could be on the way. Within minutes her weather forecast had turned into reality. 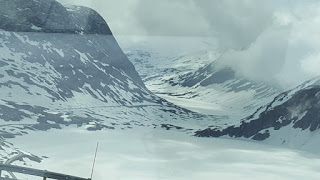 I kept telling myself that the driver was used to driving on hairpin bends in the snow, and I need not worry. 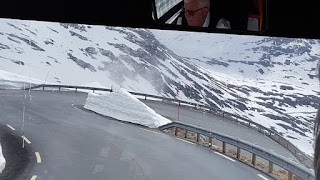 The blue lake was covered in snow. 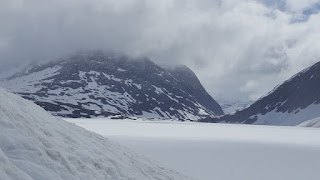 By the time we reached the mountain top, we were in a blizzard. It was certainly an experience. 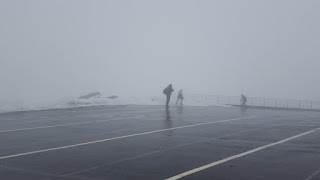 After we had all queued in the swirling snow to use the mountain top WCs, we climbed back onboard the coach and slowly descended into town to catch the tender back to the ship. Once again the sun shone as we sailed out of the fiord in the early evening. We listened to the travel speaker’s commentary from our balcony as she described the ‘Seven Sisters’ waterfalls and the bottle-shaped cascade which legend said tempted the ladies towards the opposite side of the fiord. 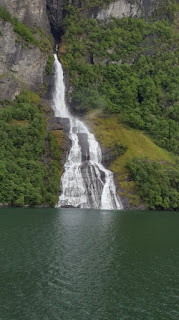 A realisation that we only had one more stop began to invade our thoughts. The next day we would wake up in Bergen before turning around and sailing south to the UK.