If you have been following my blog, you will know that we have experienced some rough weather on cruise J715. After a warm two days in New York, we encountered high winds on the edges of Hurricane Jose, and the hurricane is still around. As a consequence, we missed Rhode Island and we have also now missed out Bar Harbour. This is a great shame on a cruise which is not 'port heavy', but we can't blame P&O for bad weather. It's just bad luck. So we were relieved yesterday when we reached Boston and were finally able to step on land, even though it rained all day!
Boston is a spacious town, famous for tea parties and Havard University, but on this occasion we chose simply to explore the town. P&O provided complimentary shuttle busses from the port to the centre. The queues were long, but the wait was short, as the bus service was well organised. 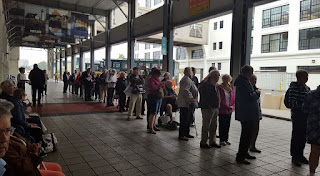 We were dropped by the ornate Quincy Market, which was full of food outlets and quirky stalls and well worth a visit. 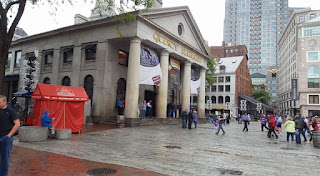 We purchased a couple of Christmas decorations and I bought a lobster hat, which might come in handy for one of my poetry performances. The shopkeeper insisted on taking this photo of us both. 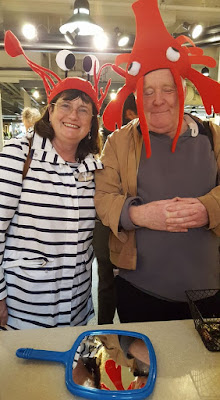 Despite the rain, we managed to visit the harbour and a couple of small parks, as well as watching the popular hop on trolley busses which take tourists around the town. 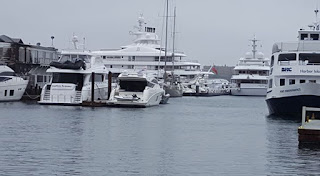 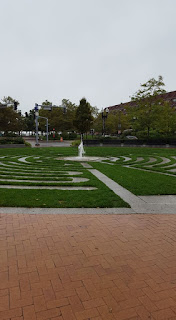 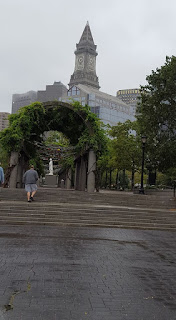 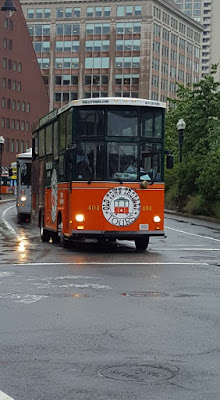 Chris made friends with a famous US basket ball player. 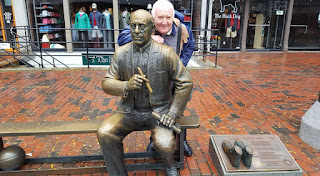 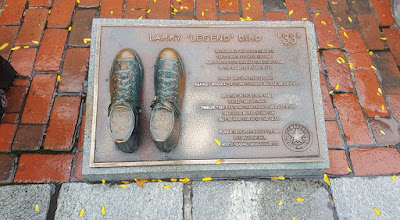 My favourite part of the day was definitely lunch. We sought refuge from the rain in a restaurant called Tia's where we tried the local Clam Chowder which they serve in bowl made out of bread. It was absolutely delicious, and I enjoyed gradually eating the bread as well as the soup. I might try making this at home, if I can work out how to make the bread strong enough to support the soup! 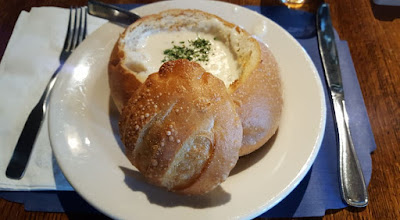 Today we have again been at sea, as we make our way to Halifax Nova Scotia. We've been in a wet force 9 gale all day, but remain hopeful that the weather will eventually improve!
Posted by Claire Baldry at 18:48