Hello once again from cruise J715....sorry for the delay in posting, but we have had three busy days. Firstly, we were informed that we would be going to Saguenay on 27th Sept (today) instead of it being a sea day, and we would not now be visiting Sydney, Nova Scotia on 28th, which was the scheduled port. This meant a later sail out of Quebec yesterday, immediately followed by a day in Saguenay today, then six sea days home to Southampton starting tomorrow instead of the scheduled five. The change does sort of make sense, because we lost our day in Saguenay earlier due to the propeller problem. I've never been to Sydney, so I really don't know what we have missed. I rather hope it's horrible. The P and O staff have had to reschedule a load of coach trips, and it has been somewhat confusing, but everyone has been trying to make the best of it.
The GOOD NEWS is that (albeit shorter than planned) we had a fabulous day in Quebec. The weather was beautifully warm, and the night-time sail in was impressive. 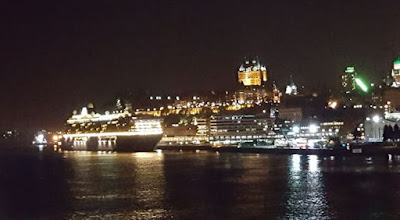 I stood on our balcony cabin and watched the local folk dancers wait until the gangway was in place, so that they could board the ship for their slightly delayed show. 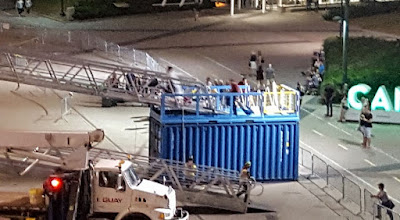 The following morning the ship was bathed in bright sunshine. 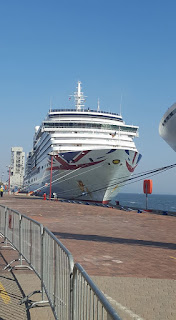 Provisions were taken onboard by crane, including a large supply of pumpkins....maybe in preparation for Halloween? 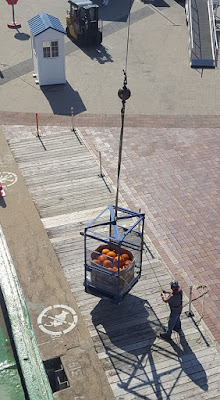 We didn't take a coach trip, but wandered into the old town and admired this fantastic town with its historic buildings, impressive furnicular railway, and quirky streets. Chris made another friend. 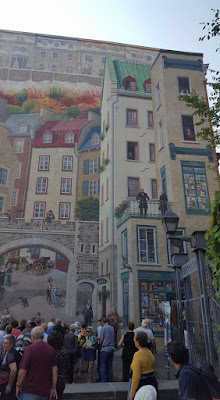 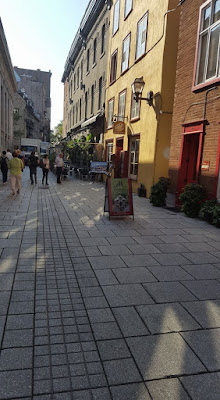 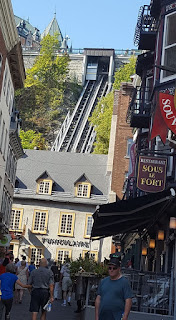 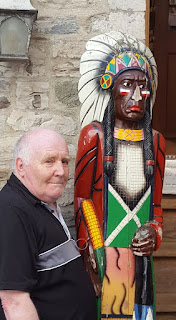 When we returned to the ship I finally had time to take my first swim in one of the ship's two pools, and dry off in the heat of the afternoon. The weather lifted our spirits as we watched the sunset behind Quebec before our overnight journey to Saguenay.....more of that shortly. 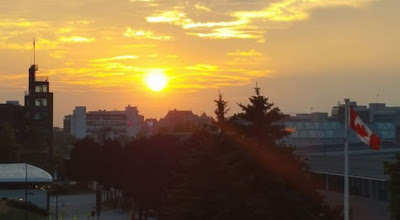 If you are enjoying my blog, why not consider reading my first novel, which is now available on Amazon. The ebook is only £2-48, printed copies are £7-99. This is the link Different Genes.
Posted by Claire Baldry at 14:02